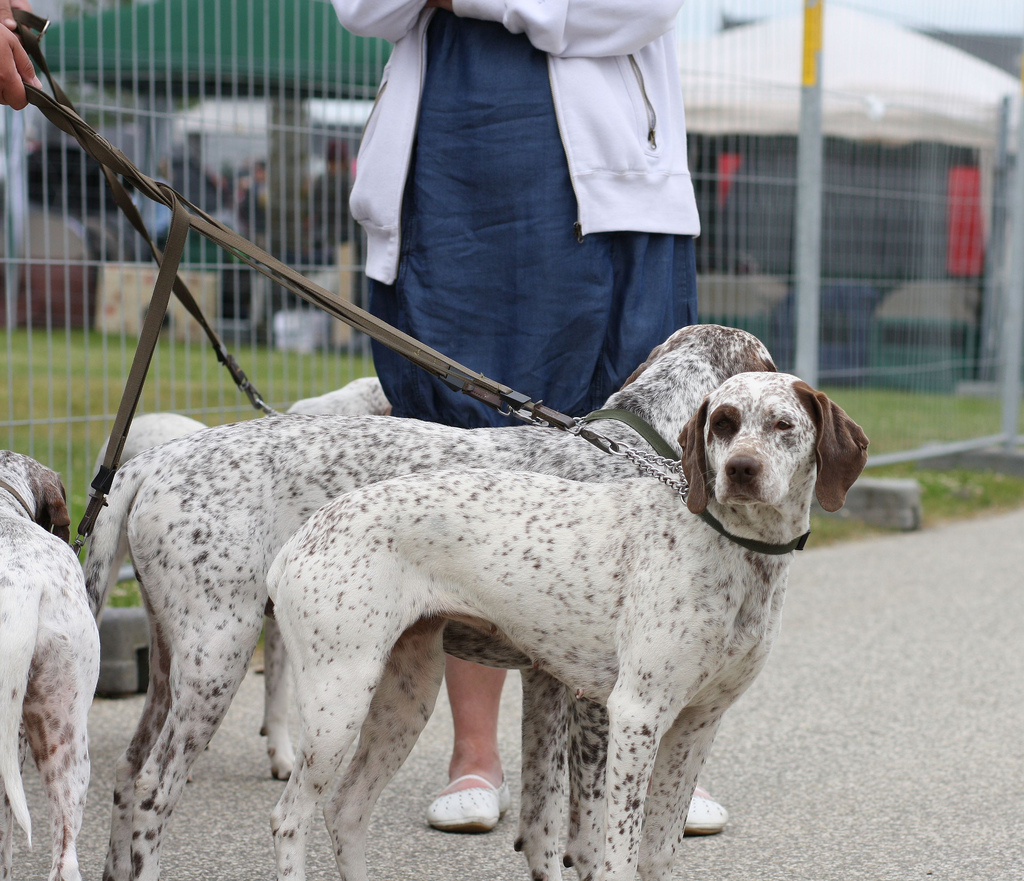 The Braque du Bourbonnais (pronounced brock-do-bor-bon-nay) is a muscular pointing dog developed in the Bourbonnais province in France.

The dogs’ rounded heads and large noses match their coat color. Their eyes are big and either hazel or amber. The ears fall along the cheek and may be slightly curled, and the tail is set low.

Braques du Bourbonnais have arched toes and a short coat with fine or coarse hair. Coat colors include chestnut and fawn with ticking and/or spotting.

2. Where the Braque du Bourbonnais Came From

The Braque du Bourbonnais appeared in French literature in the early 1500s, and the breed’s origin can be traced to the Bourbonnais province in France.

The first Club du Braque du Bourbonnais was formed in 1925, and the breed standard was published in 1930. Breeders wanted a naturally tailless dog and started focusing on appearance rather than quality and attributes. As a result, the Bourbonnais breed nearly went extinct.

Through the efforts of a group of breeders, the breed’s revitalization was successful. The new breed standard was published in 1991. The first Bourbonnais appeared in the United States in 1988.

3. How Friendly Is a Braque du Bourbonnais?

Braques du Bourbonnais are calm and affectionate, and they love their family members. The flip side of this is separation anxiety if they’re left alone for a long time.

They are easy to train, learn quickly and get along well with other dogs.

HIGH: This breed needs daily exercise and an active family who spends lots of time outdoors.

Without exercise, the dogs can become destructive or exhibit behavioral problems. For this reason, we don’t recommend Braques du Bourbonnais for apartments dwellers unless you’re regularly active outdoors.

D’awwww — look how wiggly this Bourbonnais puppy is:

Regular maintenance includes keeping the nails trimmed and cleaning the ears and the dog’s teeth.

If you’re hunting with your Braque du Bourbonnais, check the dog thoroughly for debris and insects when returning indoors.

LOW: The Braque du Bourbonnais is a generally healthy breed, though you should be aware of a few notable health concerns:

5. How to Adopt a Braque du Bourbonnais

Braques du Bourbonnais may be difficult to find for adoption. A recent online adoption search revealed very few available in the United States.

If you contact a breeder, spend time to get to know them, view their kennels and be on the lookout for signs that their dogs are suffering.

Is Your Dog Afraid To Let You Out Of Their Sight? Here’s What You Should Know
Would You Clone Your Dog? – Dogster
How Bad Is Tea For Dogs? What Should I Do If My Dog Accidentally Drinks Some?
Best Doggos of TikTok ~ Funny Dogs & Cute Puppies
Clean Those Teeth! February Is National Pet Dental Health Month